Drop in here for anything about our Wireless Outdoor Security Camera.

Outdoor Camera NOT connecting to wi-fi

Evening - my Simplisafe system is otherwise working pretty well...the outdoor camera though is a notable exception. When I first installed it ~1 month ago, it connected to wi-fi, but the battery died every 2-3 days. After getting tired of charging it that often, I tried to remove the camera from the system and re-install it. Lo and behold, now the camera won't connect to my wi-fi network (the same one it could connect to before).

I've tried just about everything I've read to get the camera to connect to no avail. The reason I fear it might be something with the camera is that I tried to connect inside the house (see photo). I'm roughly 10 ft from the base station and the white block you can see in the background is a node in my mesh wi-fi network, so its super close.

The only thing that's occurred since the camera connected the prior time is a firmware update for the base station. Has anyone else noticed any second order impacts after the most recent firmware update? 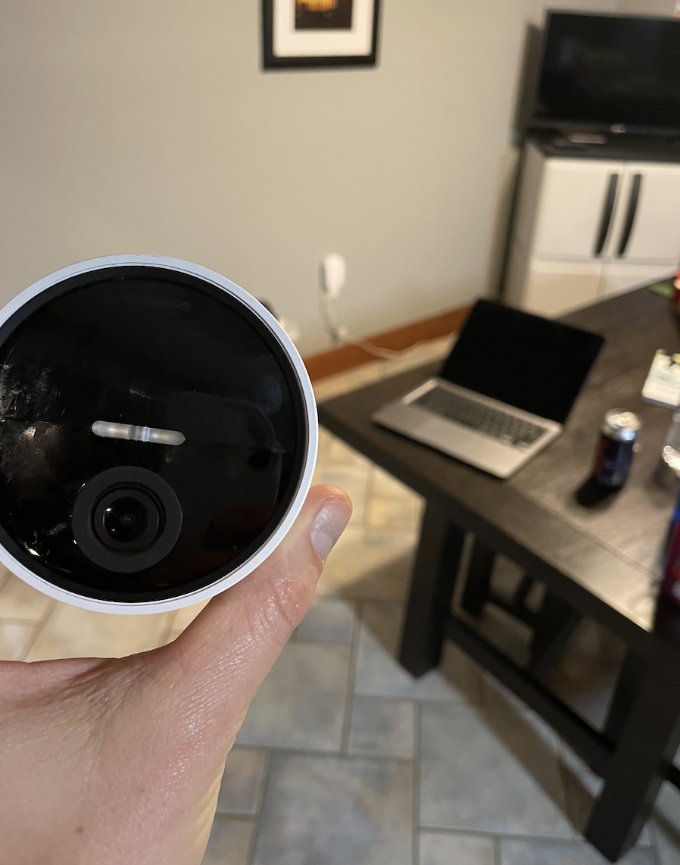 Any ideas/help would be most appreciated!!

Following up on my original post…somewhat sheepishly…on the camera install process the point at which the app tells me it is “connecting” there is a prompt on the keypad acknowledging that an install is in progress. Once I clicked on the right arrow everything connected and the views of the camera work on the app!!

An assist to Jet (sp?) at SimpliSafe support for the walk through.

Still not sure the battery life issue that caused all of this is resolved, but I’m putting the camera install/setup issue in the win column for today!!!

It has finally worked! It is updating!!!

I kept trying and trying, I guess I needed some luck from the community. Now, These are the last changes I had to do for this to finally work!

- For WiFi 6, disable 802.11ax / WiFi 6 on the 2.4Ghz band! (Now, My indoor camera connected before just fine without me having to change this setting, so I am not sure what is different about the wireless outdoor camera)

- Control Channel MUST be 1, 6, or 11 (I think this was the blockage all along!) I came across this thread https://community.simplisafe.com/conversations/wireless-outdoor-security-camera/outdoor-camera-not-connecting-to-wifi/61c28605e4279c627b167443 and it is indeed needed. I have had my control channel to set to Auto and it would pick a different one since it was less congested.

- The last piece is Authentication Method! It must be WPA2 encnryption. I had thought about this a while back and had changed the encrption to WPA/WPA2. But a couple of minutes ago, while doing these changes, I decided to select only WPA2. So it seems that it must be WPA2 only.

- I had to forget the network from my mobile and reconnect to it after all this changes. Consider this if needed.

I would recommend to perform these changes one by one to see which one will unblock you!

This has been a long journey. I hope this help! Now that I know the outdoor camera  works, I can now create a complete separate network for them, since I have some other devices in my 2.4Ghz and I would like to keep the highest encryption available and take advanatge of the less congested channels!


I hope this helps someone else! Cheers!

@massy91​ thanks so much for doing the legwork here! I'm pinning your post to bring attention to it.

I’m having the exact same same issue with my 2 outdoor camera’s. They sent me 2 new batteries thinking they were the problem. New batteries in and they still will not connect or even light up.

SS does recommend using a mesh network setup. I set mine like this.

I'm still learning with the system, so found a few other data points here that I think further confirm the connection issue isn't wifi, but something with the app.

1. I have eero mesh wifi and that app lets me see what devices are connected to my wifi network - that app shows the outdoor camera connected to the 2.4Ghz band of the network (as intended).

2. When I put the system in "test mode" and press the button on the back of the outdoor camera, the base station repeats back to me that its connected.

Therefore, the issue as far I can diagnose is with the Simplisafe app and NOT with the wifi network. Everything looks to be working/connecting as it should except for the final outdoor camera set up in the app.

@pottsz same here!  Exact same issue. All was great until I had to recharge battery in outdoor cam and now it won’t connect to the same Wi-Fi that worked just fine 10 hours ago. Super frustrating!

@pottsz.   Same here. I have done all the mentioned. I do not have a mesh wifi system just your standard style.

So the symptoms are that your camera had previously been connected, then the battery died. You then attempted to disconnect the camera and reconnect it, but now it's not longer able to do that.

When you disconnected the camera from WiFI, did you reset the camera? You do that by holding the button in the back for 16 seconds. When you release, it should reboot into setup mode, ready to be set up again.

@davey_d  The reset did the trick, but I had to install with keypad and use the App in my iPad to finish installing.  Is this standard to need a reset each time recharging the battery?  Is there something wrong with the App itself?

Following up on my original post…somewhat sheepishly…on the camera install process the point at which the app tells me it is “connecting” there is a prompt on the keypad acknowledging that an install is in progress. Once I clicked on the right arrow everything connected and the views of the camera work on the app!!

An assist to Jet (sp?) at SimpliSafe support for the walk through.

Still not sure the battery life issue that caused all of this is resolved, but I’m putting the camera install/setup issue in the win column for today!!!

@davey_d  Yeah that phone number is NO good! It was a survey! Thanks Davey D for nothing!

I just called Customer service and they are sending me 2 new camera's. I'll report back when they arrive and let you all know if they will connect or not.

OK, as promised, I am reporting back to you all. I received 2 new replacement cameras today and I then fully charged both batteries that came with them. I next confirmed that my system was up to date and the phone app was up to date (which they both were). I then followed the "new camera" setup procedures on the phone app and BAM!!! they both fired up and work flawlessly.  Batteries are showing full and all of this on my first try!!!!! Now, I'll keep my fingers crossed and hope they continue to work.

When I found this post I felt positive I would make my brand new outdoor camera work, but no luck. I have been trying to setup this camera for 4 months now. I am very tech savvy and have tried absolutely everything, including replacing my home network mesh network with brand new routers,  disabling 5ghz altogether, testing different 2.4ghz networks, disabling firewall, changing DNS settings, etc., etc. etc. Oh, as well as opening port

8890. I have come across so many posts online during these 4 months and have tried everything.

Given the fact that all my network devices, including another simplisafe  camera has no issues at all, I am beliving is the device itself. I have now deviced to conact support since I have exhausted all troubleshooting and alternatives.

Thank you for all of you who take the time to provide suggestions to the commnuity.

@massy91​ Also, I have consider if I get the new firmware file and a feasible tool/process to update it while connecting the camera to a computer, I am willing to try it. I will  be asking support about this option.

It’s been 5 months now since SimpliSafe replaced my cameras as early stated and they are still working flawlessly. I would bet that your camera needs to be replaced Massy91.

2 out of 2 users found this helpful.